The model, the media moguls and Mariah: a match made in media heaven

Annabel Crabb captures the community spirit of the Packer/Carey and Murdock/Hall engagements.

Moguls who have made their dough in tabloid media are rarely uncontroversial. But you really have to rise and salute when they decide to put a little back into the entertainment ecosystem.

Which is why I dedicate this column in grateful thanks to Mr Rupert Murdoch and Mr James Packer who – selflessly and without a thought for themselves – deliver so much pleasure to so many simply by choosing to marry amusing people.

Take Mr Murdoch, first. It takes a certain kind of mogul to preside over an empire in which the phone-stalking of Peter Andre is in any way central to the business model.
--------------------
Turning to James Packer for a moment, one is of course forced to acknowledge that he is no longer a media mogul in the technical sense. But his deep commitment to popular content generation is beyond compare. I don't know if I can think of any series of paparazzi biffo snaps that has provided more shouts of joy than the action shots of Mr Packer, in 2014, deep in a Dad-scrabble with his mate David Gyngell while clad in an expensive but tragically gravity-susceptible pair of silk and cashmere trackie dacks.

But those trifling capers were as nothing compared to the hillbilly-heroin rush of pleasure to be derived from any Google image search incorporating the terms "James Packer" and "Mariah Carey". Now add the term "Halloween", and tell me I'm wrong.

The model, the media moguls and Mariah: a match made in media heaven
at 9:49 PM No comments:

The rise of stupidity

"What scares me the most? Stupidity," he said, adding that a simple overview of comments on the Internet will uncover "this massive, naked onslaught of stupidity."
Sure, but do we really need a film director to point this out?  Twitter launched the daily death of trillions of brain cells, even for those who don't use it, yet have to endure news that's based on nothing more than what one prat tweeted to another prat.
Maybe this is what the end of civilisation looks like.
He's wrong about science fiction writers not predicting the internet, plenty did, and most particularly  William Gibson, Neuromancer.
Read more at: http://phys.org/news/2016-01-werner-herzog-blasts-stupid-social.html#jCp
at 6:21 PM No comments:

Too dumb to fail

All things US Republicans, two new books reviewed - “Why the Right Went Wrong” and “Too Dumb to Fail”.

A good summary of the state of the Republican Party:


He argues that the conservative movement has been captured by “empty-headed talking point reciters, rookie politicians who’ve never managed anything in their lives, media clowns such as Donald Trump, dim bulbs in tight pants or short skirts, professionally outraged shout-fest talking heads and total political neophytes.” He notes that the movement is full of overdogs pretending to be underdogs. Ted Cruz, the Tea Party’s leading champion, was educated at Princeton and Harvard Law School and is married to a Goldman Sachs executive. He accuses these assorted freaks of caring more about stoking outrage than in governing the Republic. The more outrage they provoke the more money they can raise — and the more money they can raise the more outrage they can stoke.


‘Why the Right Went Wrong’ and ‘Too Dumb to Fail’

When storing komono – my term for miscellaneous items – the only way to know the best place for any item is to think yourself into the character of that item. Before I put a komono item away, I joyously climb into the storage space and imagine what it would be like to be stored there. Only then can you know if the Toilet Duck cleaner would be really at home under the bathroom sink.

Once you’re living joyously with all your possessions joyously stored away joyously, you are free to move on to the most advanced joyous level of joyous tidying. See that lump sitting in the armchair watching the football when you want to watch Making a Murderer? Ask yourself this: which gives me more joy? The lump or the empty chair? So ditch him.

The Committee's Choice for Word of the Year 2015 goes to... captain's call.

Now I have a bone to pick with the word of the year committee: isn't it captain's pick, not captain's call?

noun a decision made by a political or business leader without consultation with colleagues.

Captain’s call perfectly encapsulates what happened in Australia over the past year. There has been an interesting change in usage; an infrequent item of the jargon of cricket makes the leap into politics and is now being used generally with an ironic tinge to it that is very Australian.

Honourable Mentions
The Committee would like to give honourable mention to...

noun an urban male who wishes to associate himself by his appearance with a rugged outdoors way of life,
as by wearing outdoor clothes such as check shirts, jeans and large boots combined with a beard as typical of a lumberjack.

It used to be all about women’s fashions, but the words are now being dominated more and more by those related to men’s fashion. Lumbersexual is an organic phenomenon that someone has identified and named. It is a neat coinage and perfectly describes this style that peaked in Australia over the past year.

The idea of deso is very topical. It combines a drinking culture with that of a law-abiding society. The word structure itself is typically Australian – a shortened form with an -o ending. It is astonishing how quickly and smoothly the deso became part of our lives.
at 7:17 PM No comments:

100 "female-oriented" features - so there will naturally be extra large rear-view mirrors for applying makeup, and special handbag nooks with every chair, a hot pink racing stripe, and a team of full time manicurists?

Most commonly searched words in 2015

According to the Macquarie Dictionary, the following were the most commonly searched words in 2015, which merely begs an awful lot of questions about the populace at large. 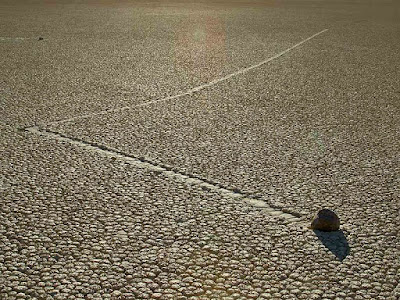 Death Valley, California, in the United States is known as one of the hottest, driest places on Earth. In this desolation without much life, the problem of the “sailing stones of Death Valley” has stumped scientists for over half a century. At a dry lake bed known as Racetrack Playa, stones that weigh up to 700 pounds have been moving, seemingly without human or animal assistance, leaving tracks across the desert sands. Since their discovery in the 1940s, several theorists have attempted to solve the mystery of the rocks’ movement, but it may have only been in the last year that science has provided an answer.

The sailing rocks can be seen spread around the desert floor and make intricate and interesting patterns with their tracks. While the tracks may be parallel, they also are not uniform, and the rocks can move in any direction, including backwards over their own tracks. Until 2014, researchers weren’t sure if the movements were caused by dervishes, hurricane force winds, or some other natural phenomena, but the cause of the movement was determined to likely be from thin layers of ice that form when the conditions are just right. The thin ice across the top of the sand pushes the rocks, which then slide based on the direction of moderate winds of about 5-10 miles per hour.

Researchers observed rocks moving as far as 180 feet over the course of 2 years while running their experiments. While some rocks moved much less than that, the stones moved an average of a few inches per second, or slower than your average turtle. The discovery lends another meaning to the whimsical name behind Racetrack Playa.
at 2:37 PM No comments: