I'm fairly sure that this relates only to testing for alcohol consumption, rather than bad breath (although politicians with bad breath really should also be fined).

ALP leader, Daniel Andrews - who is now premier elect - has indicated that one of the most important matters for the state of Victoria is to pass laws to force politicians to take random breath tests.

Are sober policies superior to policies devised while drunk?

Do we have so many drunk politicians on the job that this warrants urgent attention?

Are Victorian judges and magistrates getting on the piss prior to arriving at the bench?  Are they daring to sentence drunks, murderers, thieves and gypsies while themselves loaded to the gills?


Boozy Victorian MPs would face suspension or docked a week's pay if they fail random breath tests under a new Labor plan.

Magistrates and judges would also have to submit to the on the spot checks if the Australian first powers are awarded to chief justices, judges and magistrates, the Herald Sun reports.

Opposition Leader Daniel Andrews is expected to promise today to introduce random alcohol testing at the state's court and at Parliament sittings as part of his bid for premier.

"We make laws about Victorians being .05, and judges enforce them," he said.

WESTMINSTER, Mass. — The fury — and make no mistake, it is white-hot fury — went way beyond the ordinary wrath of offended citizenry. A plan here to ban the sale of tobacco has ignited a call to arms.

The outrage is aimed at a proposal by the local Board of Health that could make Westminster the first town in the country where no one could buy cigarettes, e-cigarettes, cigars and chewing tobacco.

The uproar stems not from a desire by people here to smoke — only 17 percent do (a smidge higher than the statewide average). Many say they have never touched tobacco and find the habit disgusting. Rather, they perceive the ban as a frontal assault on their individual liberties. And they say it would cripple the eight retailers in town who sell tobacco products.

The ban is the major topic at Vincent’s Country Store, where a petition against it sits on the front counter and attracts more signatures every day; at last count, 1,200 people had signed, in a town of 7,400.

As shoppers come and go, they feed one another’s fury.

“They’re just taking away everyday freedoms, little by little,” said Nate Johnson, 32, an egg farmer who also works in an auto body shop, as he stood outside the store last week. “This isn’t about tobacco, it’s about control,” he said.

Nearly 500 people packed a hearing at a local elementary school on Wednesday night held by the three members of the Board of Health. Passions ran high, and the hearing became so unruly that the board chairwoman could not maintain order; she shut down the hearing 20 minutes after it began.

The crowd started singing “God Bless America” in protest as the board members left under police protection. Angry residents circulated petitions demanding a recall election for the board members.

Disgusted by smoking, outraged by a plan to ban tobacco

The fastest growing grocery category in the last year: roll your own tobacco, with a 15.7 per cent increase. Potato chips are second, and ice cream third. Medicinal items come in at number four, at 5.4 per cent increase, marginally ahead of cigarettes, which increased by 5.5 per cent.

Number six is yogurt. Seven is confectionery. Then bread, coffee and soft drinks.


So, basically, the nation is eating a lot of chips and ice cream, smoking a lot, and cheering themselves up with a glass of coke or a cup of coffee.

What we learned this week 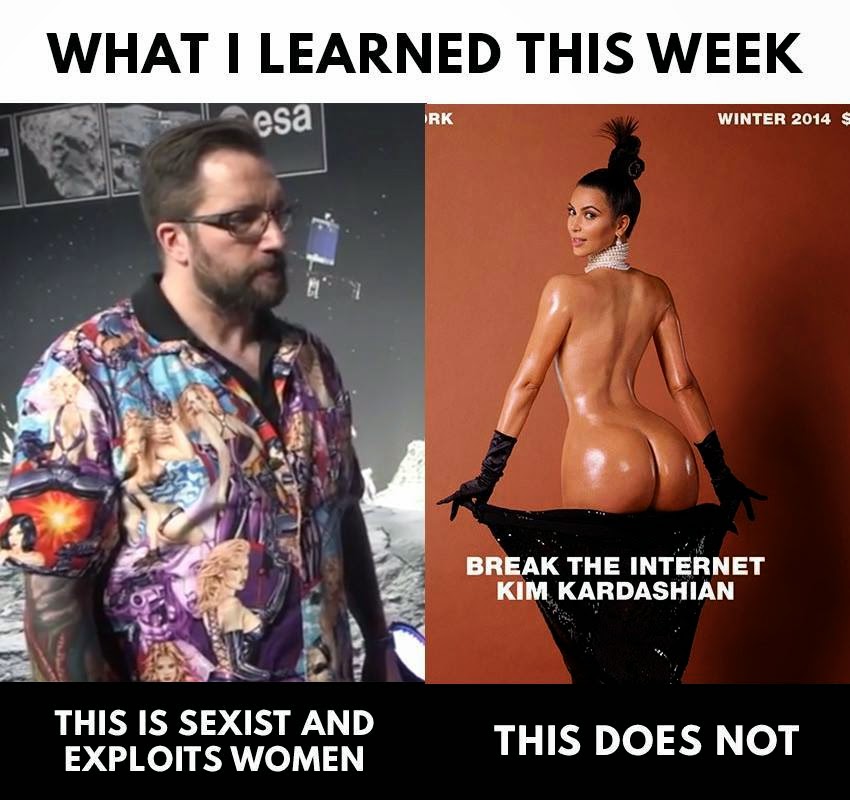 Labels: Comet 67P, Kim Kardashian, Matt Taylor, Philae, Rosetta, What everyone else is thinking about

I'd settle for a PM even half as 'bad'

... maybe we could have him after he fixes Canada.

Oh for the olden days, when decent political insults were a daily event

Social Services Minister, Kevin Andrews copped a spray from the speaker in the Northern Territory.  This is how she commenced:

"Listen here you pooncy, pasty faced person from some pissant place that no one cares about."

It doesn't matter what else she had to say about Andrews, She covered the most important bits with 'poncy' and 'pasty faced'.

As we've all witnessed over the last decade, finding, preparing and eating food have become prestigious recreational skills, rather than a means of survival.

Along the way, Woolworths has demoted chefs, insisting, instead, that someone who spends years of their life being underpaid, overworked, and trained to cook for others to a standard that the rest of us won't ever master, are nothing more than foodies.

“We have put in a tasting station; we have a foodie here permanently who cooks up something different every day and anything that is seasonal, fresh or special. What is great about having a foodie here is that you are not really going to say, ‘Ooh, I will have wild boar tonight’, but you will if you taste it.”

The current foodie (a Parisian chef called Frederick) is also responsible for training staff and providing advice to customers on food matching. This recently extended to an event with the neighbouring Dan Murphy’s store, which opened a $30,000 bottle of whisky (in conjunction with a whisky appreciation society) and matched it with the best products from the cheese room. “That’s what the foodie does - bring a love of food into the store,” says Gill. “And we get incredible comments about it. And what I love about that is it’s not the layout of the store, it’s not the signage, not the groceries - it’s real, it’s the people, and I think that is a big change.”

Four times.  Four times she gushes about the in-house foodie.  That's no accident.  That person used to be a chef.  Now they work for Woolies.

The American owner of a wildlife park in Mexico was killed by one of his animals this Monday. Richard Mileski of Chicago died after being kicked, bitten and sat on by a camel at the wildlife park he owned in the Mexican resort town of Tulum.


“The camel kicked and bit him practically to death, and when he was almost dead, he sat on him,” Tulum Civil Defense official Alberto Canto told the AP. “Between the blows and the weight of the camel on top of him, he was asphyxiated.”


He said it was still unclear why the animal, which was in a kind of enclosure, attacked Mileski, and authorities were sorting through a number of versions, including one that the camel was angry not to get a soft drink.


“One version is that he would always give him a Coca-Cola to drink, and apparently that day he didn’t give him the Coca-Cola,” Canto said. But, he added, “there are a lot of versions.”

Rescuers used a rope tied to a pickup truck to pull the angry dromedary off of Mileski’s body.