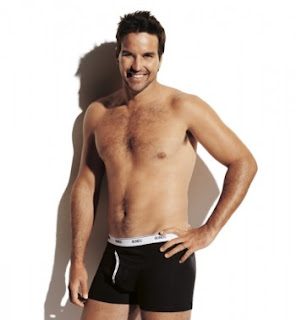 Coles has conducted a survey on the underpants buying and wearing habits of little Aussies, with frightening results.

Forty per cent of Australians wear underwear with holes.

Twenty four per cent only buy new underwear once a year.

In conclusion:  Australians might wear clean undies, in case they're hit by a bus, but they're not good undies, they're not necessarily undies that even cover anything, or stay up of their own accord.
at 8:53 PM No comments: 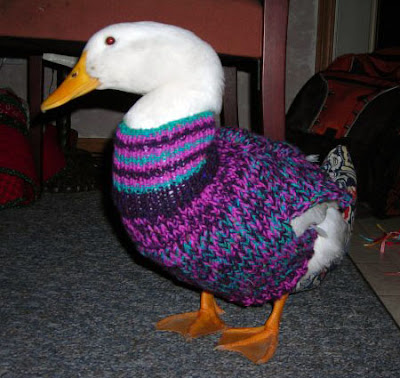 And this is why we should only eat real food

Need more proof that not all take away is equal, or defeatable?  Look no further than the latest evidence of a McDonald's burger, still perky after 14 years of storage in non-health and safety approved conditions.

Sure, the pickle has broken down - although still identifiable - but the bun and the meat are good to go.

Evidently, the only thing that will survive a nuclear bomb is not cockroaches, but Macca's burgers (and fries; has anyone tried this with the fries?).

I won't be giving up my thirty cent soft serve cone any time soon, but I'll be sticking to my local curry, Thai and Italian take away when in need of fast food.


Australians look set to vote in a referendum on whether the Constitution should formally recognise local government as the Gillard government forges ahead with plans to put the question at the September 14 federal election.

The Australian understands an approach has been made to Tony Abbott on behalf of the government on the issue and the Opposition Leader has indicated he would support the referendum.

Following the approach there is now an expectation there will be a referendum on the issue.

However, despite federal bi-partisan support, at least two states are likely to oppose the question, setting the scene for a referendum showdown in parallel with the federal election campaign.

A spokesman for Local Government Minister Anthony Albanese said as a matter of principle the government supported constitutional recognition of local government.

This change to the Constitution was unsuccessfully tried by both the Hawke and Whitlam Labor governments.

Yes.  That's two fails.  So Gillard is going to give it a third whirl (allegedly) at a general election that will be one of the most game-changing in Australia's history.  As diversionary tactics go, it's up their with the antics of the Three Stooges.

That which is excellent endures.

The price of the Federal ALP

Having endured an enormous bucketing over the price, the government made a belated attempt to ameliorate the damage caused by the fiction by announcing that from 2015 the Australian scheme would be linked to the European price.

Treasury predictions were that the price would be $29 in 2015-16. What has happened to Treasury? It did not come as a great surprise to most people to see that the European price is about $3 as of today. 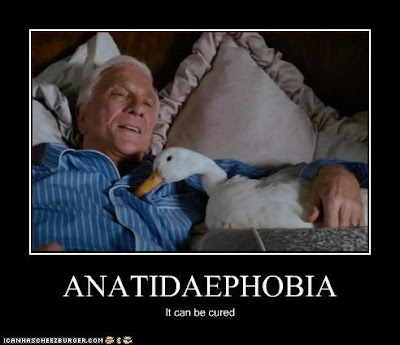 There is a law of life, so cruel and so just: that one must grow or pay more for staying the same.

Can Abbott's team really piss away a certain victory?  If this is an indication on what they'll take to the ballot box and how they plan to rule - you bet!


Instead of fibre to the premises, the Coalition would deliver fibre to the node and rely on Telstra's existing copper telephone line to cover the last few hundred metres into a building.

The Coalition's cheaper and slower alternative to Labor's national broadband network has been labelled a ''nonsense'' by experts, who argue it will put Australia behind the rest of the world.

The Coalition will buy back Telstra's copper network and use it as an integral part of its alternative national broadband policy.


But Geoff Huston, chief scientist of regional internet registry Asia-Pacific Network Information Centre and a former Telstra employee, said: ''What [the Coalition] is trying to say is 'what we do now on the internet is what we will do in the next 30 years'.

''What stupid nonsense! What we were doing 30 years ago modems could handle,'' Mr Huston said. ''I would side with the view that this [policy] is indeed a lemon.'

Copper key to coalition's network plan
at 1:25 PM No comments: 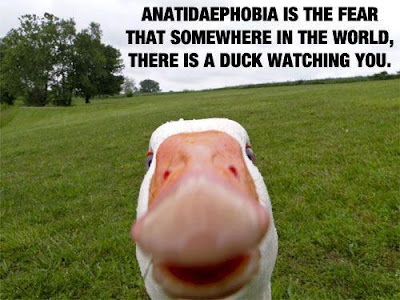 I did the best I could with what I had.

"Labor is vowing to take superannuation policy "out of the hands of government" to counter fears of another hit to savings if it retains power at the federal election, as ministers refuse to rule out further tax changes."

Labor vows to take super out of politicians' hands 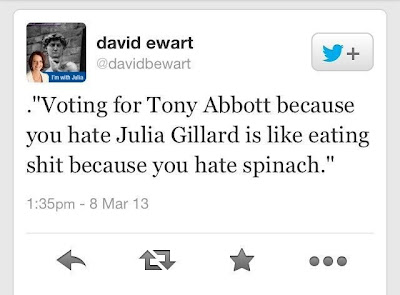 Even funnier is that most of the Australian voting population has decided they'd prefer to add shit to their daily dietary adventures than to eat spinach ever again.

He needs a snack 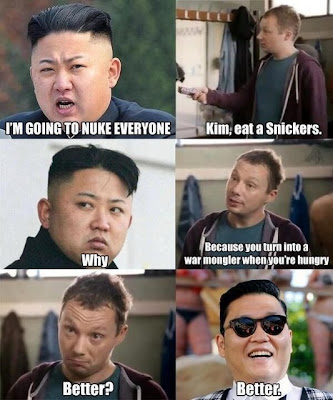 One thing is for sure, and it is perhaps best left to a Daily Mail headline: ''With sales of 2012's daftest fashion craze up 600 per cent, the jokers who invented it are laughing all the way to the bank.''

It's called a jumpsuit.  Babies wear them.

The onesie is not an invention.

No adult, in the privacy of their home or in public, should ever wear a large baby jumpsuit. 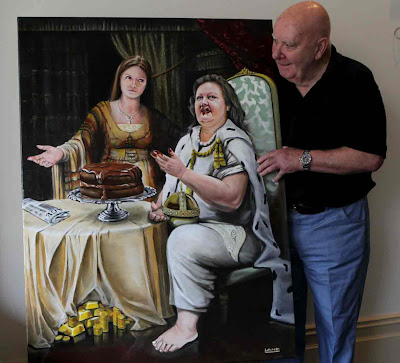 Melbourne artist Warren Lane has won the $7500 Bald Archy first prize with The Banquet of Gina and Ginia, a painting that depicts the mining billionaire eating chocolate cake as her favoured daughter looks on.
at 10:27 PM 10 comments: 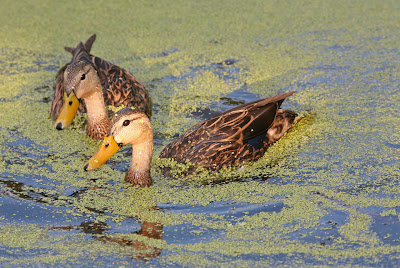 Sometimes I wonder whether the world is run by smart people who are putting us on or by imbeciles who really mean it.


The Green Doomsayers are hyperactive when it comes to lecturing us about the temperature, because, they insist, temperature and climate are not fungible.

Temperature is, by their logic, nothing much to do with Armageddon, even though the singular focus of Climate Change/Global Warming/Extreme Weather Events is, in fact, the temperature.  As in: "the temperature will rise by 6 degrees within 100 years years and we'll all be ruuuiinnneddd" (and you and I will be long dead, so for us, not so much an issue).

Contrary to this, they have their go-to denial admonishment, as in: "one iced-over, cold as shit, murderous winter doesn't change the data on Climate Change".  No way.  Cold weather is just the temperature dropping, not evidence of Global Warming being an embarrassing and expensive fraud.

Global warming has been on hiatus for 20 years.  Not that this will stop the Doomsayers and economic vandals. Twenty years isn't long enough, they'll tell us.  Come back with more data at some arbitrary distant point, of their choosing, and maybe they'll contemplate how it is that the allegedly predictive computer models, with all their known deficiencies and gaps, could possibly, maybe, perhaps, have gotten it so wrong.

And in case you didn't know (I didn't):  burning coal is good, it keeps the temperature down.  Thanks China!  Thanks India!

Debate about the reality of a two-decade pause in global warming and what it means has made its way from the sceptical fringe to the mainstream.

In a lengthy article this week, The Economist magazine said if climate scientists were credit-rating agencies, then climate sensitivity - the way climate reacts to changes in carbon-dioxide levels - would be on negative watch but not yet downgraded.

Another paper published by leading climate scientist James Hansen, the head of NASA's Goddard Institute for Space Studies, says the lower than expected temperature rise between 2000 and the present could be explained by increased emissions from burning coal.

For Hansen the pause is a fact, but it's good news that probably won't last.

International Panel on Climate Change chairman Rajendra Pachauri recently told The Weekend Australian the hiatus would have to last 30 to 40 years "at least" to break the long-term warming trend.

But the fact that global surface temperatures have not followed the expected global warming pattern is now widely accepted.

"If we have not passed it already, we are on the threshold of global observations becoming incompatible with the consensus theory of climate change," he says.

Whitehouse argues that whatever has happened to make temperatures remain constant requires an explanation because the pause in temperature rise has occurred despite a sharp increase in global carbon emissions.

The Economist says the world has added roughly 100 billion tonnes of carbon to the atmosphere between 2000 and 2010, about one-quarter of all the carbon dioxide put there by humans since 1750. This mismatch between rising greenhouse gas emissions and not-rising temperatures is among the biggest puzzles in climate science just now, The Economist article says.

"But it does not mean global warming is a delusion."

"Or it might mean that the 1990s, when temperatures were rising fast, was the anomalous period."

"This possibility, if true, could have profound significance both for climate science and for environmental and social policy," the article says.

There are now a number of studies that predict future temperature rises as a result of man-made carbon dioxide emissions at well below the IPCC best estimate of about 3C over the century.

The upcoming IPCC report is expected to lift the maximum possible temperature increase to 6C.

The Economist says understanding which estimate is true is vital to getting the best response.

"If, however, temperatures are likely to rise by only 2 degrees Celsius in response to a doubling of carbon emissions (and if the likelihood of a 6 degrees Celsius is trivial) the calculation might change," it says.

"Perhaps the world should seek to adjust to (rather than stop) the greenhouse-gas splurge.

"There is no point buying earthquake insurance if you don't live in an earthquake zone."

Hansen argues that the impact of human carbon dioxide emissions has been masked by the sharp increase in coal use, primarily in China and India.

Hansen's bottom line is that increased short-term masking of greenhouse gas warming by fossil fuel particulate and nitrogen pollution represents a "doubling down" of the Faustian bargain, an increase in the stakes.

If we go with Hansen, this hiatus could turn out to be a win-win for the Green Doomsayers.  Yeah!