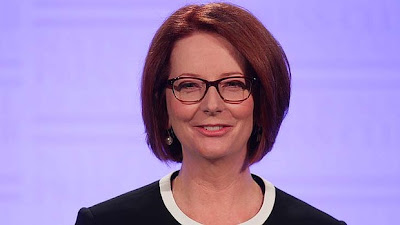 September 14 is also smack bang in the middle of the footy finals, it's the pointy end of the season for all codes of the game, a time during which many people in Australia spend their weekends eating, drinking and praying.

On Wednesday 30 January 2013, Julia Gillard, Prime Minister, announced that the next federal election will be held on Saturday, September 14, 2013.

The nearly eight month election campaign is already being touted as clever, much in the way people praise a dog that figures out how to sit or roll over.  What a clever, clever girl.

P.S.  This is the reason we urgently need fixed four year terms in federal politics.  No more idiotic stunts.  No more interminable speculations on when the next election will or won't be held - and with Gillard as PM, we have had non-stop speculation, two years and four months of it.  Enough of this shit.
at 8:46 PM