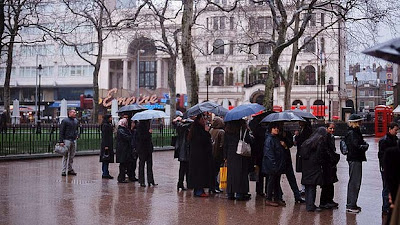 This is London's hottest restaurant. I know this because everyone says so.

You can't even hold a spot in line for other people, as we'd been trying to do. Unless your party is there in its entirety, standing on the pavement in the cold, you won't be given a little "FOOD" stamp on your wrist, and you won't be allowed the privilege of entering the building and waiting another hour at the bar for a table to be cleared. So the four of us, now fully assembled, do the walk of shame to the back of the queue.

The place where we're attempting to eat is called Meat Liquor, which specialises in American diner-style food. We're talking burgers, fries, Buffalo wings and deep-fried pickles. As a cuisine, it's so hot right now. It's also the sort of thing that's started appearing on Sydney menus in the past few years.

The food is solid American. The wine list is short. Beer is served in cans. Fancy cocktails are mixed to perfection, shaken with a flourish then presented to discerning diners in ... jam jars.