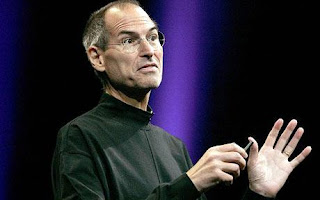 The super rich aren't obligated to give their money away; it might be a social and ethical expectation - to those who have much, much is expected - but it's not enforceable, nor are there any sanctions for those who fail to meet a rudimentary standard of generosity of spirit and cold hard cash.

Sure, there might be the odd whisper, or the odd article offering up public questions, but that's not a moral judgment that will penetrate the cloistered walls of the lives of the very rich.

Steve Jobs, founder of Apple, and designer and PR superstar, is worth about $9 billion, and is generally acknowledged for lacking the philanthropic gene.  Indeed, when he returned to Apple in 1997, he abolished all of the company's philanthropic activities.  Not keen on giving away his own money, Jobs didn't even want his publicly listed company to build social capital or good will via the well worn path of good deeds.

Sure, charity is a diversion from designing ever thinner mobile devices, but does it really take all the hours of every day to invent large, small and middle-sized versions of the same thing?  Does it really take all one's energy - and that of all employees - to negotiate contracts with skim-off-all-the-cream margins in favor of Apple?

Jobs has a wife, one son, and two daughters.  He denied that his first daughter was his, claimed he was sterile, until paternity tests proved otherwise, and, we assume, some dollars were eventually contributed to her upbringing.  There's something horribly weaselly about a man whose response to the birth of a baby - and wishing to shirk financial and emotional responsibility - is to promptly squawk that he's shooting blanks.  It's also dumb.  Fertility, like fatherhood, can be tested in a laboratory.


In 2006, in a scathing column in Wired, Leander Kahney, author of Inside Steve's Brain, wrote: ''Yes, he has great charisma and his presentations are good theatre. But his absence from public discourse makes him a cipher. People project their values onto him, and he skates away from the responsibilities that come with great wealth and power.''

Jobs is unperturbed, and unimaginative about his singular focus:


He told The Wall Street Journal in 1993: ''Going to bed at night saying we've done something wonderful … that's what matters to me.''

It's moot to ponder the extent of the wonderfulness of "i" everything.  Apple products are nice.  Apple worshippers believe, incorrectly, that buying an Apple product confers something magical - something more magical that some other product that does the same thing.  It's just a thing.  It doesn't have powers.  Every Apple product, just like other brands, becomes obsolete with remarkable speed.

It should probably not surprise that Bono - of U2 and tax avoidance fame, not to mention global ambassador for asking governments for money, but not giving his own - quickly jumped to defend Jobs, following publication of the mildly critical article in The New York Times.  The piece is more quizzical than damning, and while offering no answers, it raises intriguing questions about the Jobs' personal values, his - perhaps overly Messianic - belief in himself and his technological legacy and what it is, exactly, he thinks he is leaving behind, what worldly contribution, what lasting change he believes has bequeathed.  Not that he's obliged to leave anything of value to anyone other than his family.  Clearly he thinks, as do others, that his existential contribution to the world is something "wonderful", as opposed to a mere suite of products that break easily when dropped and smear instantly when used.


“I’m proud to know him,” Bono wrote about Jobs. “He’s a poetic fellow, an artist and a businessman. Just because he’s been extremely busy, that doesn’t mean that he and his wife, Laurene, haven’t been thinking about these things.”

That would be a long and private think.

Not wishing to be indelicate about it, but there's not much time left for Jobs to think about "these things" or any other things.

It might be that Jobs will leave it to his wife and children to dispense his wealth to good causes, or some might be named beneficiaries when he leaves this mortal coil.  Perhaps he didn't want to sully himself with having to choose the most worthy causes, or didn't want anything to detract from his business contribution - nothing at all, not even charity.  Yes, it's still possible he will give, but wants to do so when he's gone, and doesn't have to discuss or justify his choices or amounts given.  Fair enough; that's understandable.  Time will tell.

Meanwhile, there remains something strikingly vain about a man who is amongst the super-rich who can't bring himself to give, even modestly and quietly, in his own lifetime.

In five years, the "i" devices will have moved on or been replaced.  Wonderful will have proven to be more fleeting than Jobs imagines.

For Steve Jobs - charity not in the realm of "something wonderful"

Bono - not big on paying taxes or donating his own money, defends Steve Jobs