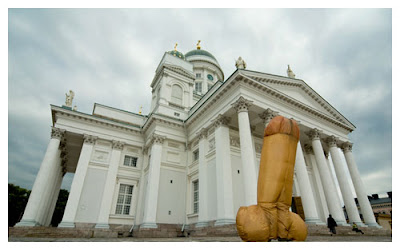 How did we miss this?

Helsinki is the home of a 2.5 metre erect penis made of brown parachute fabric.

The penis's most recent public outing was by way of a performance artist promoting a cabaret show about personal shame.

"It's about (the) personal shame of three men. And there is also one penis in the show. It's a bit smaller than this," said Sakari Maennistoe, who accompanied a fellow actor sheathed inside the largely silent-unless-spoken-to phallus.

This is not the first time the giant penis has wandered the streets of Finland, and Maennistoe said it was generally well-received."