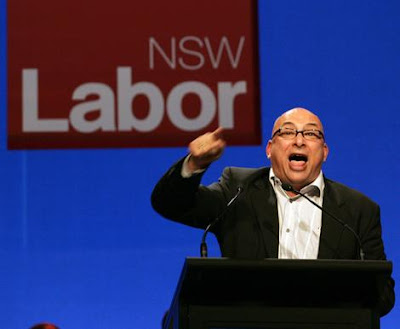 The boys in NSW are having a spat, with more color and fruity language than the beige politics down our way.

"Michael Costa stormed across the room - his face flushed, his hands clenched - towards John Robertson, the secretary of Unions NSW. "You blokes can get f---ed," he screamed. "You're going to look like dickheads on Monday morning."

The lads are all in a fluster over the ALP's plan to privatize the electricity industry.

"In the end Mr Costa took to the stage on Saturday. His arms were flailing, his voice rising. On ABC TV yesterday it was referred to as a "Mussolini-like" performance. The vote went 702 votes to 107 against him.

Just before the negotiations ended, Mr Tripodi, outside the meeting room, turned to the assembled unionists and said: "We're dead, anyway."

Asked whether Mr Tripodi was referring to the union or the Government, a union source said: "I think he meant the whole shebang, the conference, the party, the lot."

I'm frantically running calculations through my computer model to work out whether or not NSW can be verified as having more DPSI* than other other region of the country.