As we sprint (at a remarkably slow pace; more like running through treacle really) toward the federal election, all eyes are glued to the boys, but let's not forget that there's an important subset of testicle-strangling girls parading their stuff.

"Glamour" girl, Labor candidate Maxine McKew, is firming up to deliver a humiliating wipe out to the Prime Minister, which would make Howard the first PM to lose his seat since 1929.

This trend firms up my earlier suggestion that people in the rest of the country don't need to vote against their sitting Liberal members in order to oust Howard: that task would seem to be in the safe hands of the voters of Bennelong. A little bit of faith could see the country having it's cake and eating it too. I wouldn't put money on it, but the option is there for the taking.

Meanwhile. a tee wee catfight (no jelly or mud involved) has broken out between the always groomed-to-within-an-inch-of-her-life Education Minister Julie Bishop, and the graceless, style-challenged Julia Gillard.

Minister Bishop has accused Gillard of “behaving like a "fashion model or TV star". 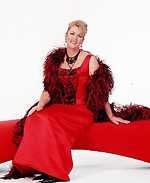 Gillard swiped back by “describing Ms Bishop as a "silly sausage". (Ms Bishop is said to be curled up in a fetal position, sobbing uncontrollably at the unusually intemperate insult.)