The Herald-Sun reports that Kevin Rudd went to a strip club in September 2003.

The Age reports that Kevin Rudd went to a gentleman’s club in September 2003.

Whichever way you spin it, he was drunk, there were naked women, and he was on a taxpayer funded jaunt, with a Labor backbencher, which cost $18.000.

“Some sources” claim that Mr Rudd was warned by the club management against inappropriate behaviour; meaning he was warned: don’t touch the naked women. He and his little group are said to have complied with the management request.

New York Post editor, Col Allan, who was out carousing with Mr Rudd (along with NT Labor MP Warren Snowdon) says that:

Mr Allan is the one who provided the story to the media. One does wonder why he would blow the whistle on a piss-up at a strip club purely so as to reveal that Kev behaved “like a perfect gentleman”. Safe to assume that Allan would not have offered-up a story about Rudd’s gentlemanly behavior if they’d hadn't gone to a "gentleman's cub" wherein Rudd was afforded the opportunity to demonstrate his "gentlemanly" behavior.

Rudd is frequently touted as working himself, and his staff, relentlessly; maybe Costello was taking a subtle swipe at that reputation with his comments:

"I find when I'm in on official business they pack your program pretty full. I don't think that you get much time for that kind of activity"

The Herald-Sun reports the circumstance thus:

"At the time, I raised these matters with my wife, Therese, and the circumstances surrounding them. I indicated to Therese that it would have been far better for me to have simply returned to my hotel after dinner."

While The Age offers the summary:

"He rang his wife, Therese Rein, at home in the next day to confess to her."

Not often a man is anxious to call his wife to confess about things he can't remember, but there ya go, Rudd does.

Four years down the track Rudd is very twitchy about the public response to his strip club visit.

"Mr Rudd said he expected his public popularity to plummet following the revelations."

Shall we do a quick vox-pox to find out what voters had previously thought was flowing through Rudd's veins?

"I mean, what I think it will do is enhance his vote - show that he's human."

And another vox-pox to find out which species voters previously thought Rudd belonged to?

"I think anybody who's has a few drinks and gone off to a club of some kind, provided they've behaved appropriately, my attitude is big deal."

Note too his ignorance of, and insensitivity to. Victorian voters, all of whom were given a cold hard lesson in the realities of our local strip clubs only two months ago.

Will there really be a backlash, or is this another beat-up by journalists with column inches to fill?

(Expect 'emergency' polls in the week ahead and breathless analysis.)

THE political danger for Kevin Rudd as he contemplates his moment of New York madness is that it gives the lie to the persona he has so far successfully sold to voters.
Only last week Rudd addressed the Australian Christian Lobby. He was a prominent member of the Federal Parliamentary prayer group.

History shows the electorate is swift in judgment on politicians who fail the character test. Ask Mark Latham. [Ouch! No one wants to be compared to Latham - ed]

A sign of humanity or a serious character flaw? Public opinion is split on whether Kevin Rudd's visit to a New York strip club will hurt the Labor leader's popularity. Of the 500 comments posted on the news.com.au website by 1pm, about half thought the incident proved why Mr Rudd was not fit to become prime minister.

"So I pay tax so Rudd can get tanked and act inappropriately at a titty bar?? Great news. Rudd is a fraud," he said.

A reader known only as Hubert said: "Congratulations Kev, from the look of this forum you have got the pervert vote stitched up. 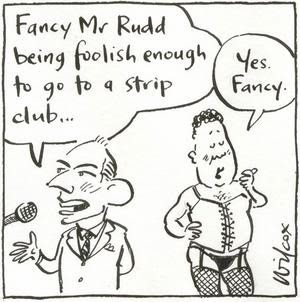