Update from the jailhouse 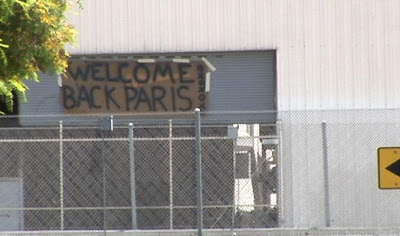 Picture caught by TMZ – the inmates were very happy at ’s return
While some patsies continue to heavily push the claustrophobia line (and how is it that Paris never had a panic attack while trying on new designer clothes in tiny change rooms; or when squashed into exclusive teeny crowded night clubs?), others are having stomach churning fun pushing tales of gross and highly improbable fast growing and fast traveling thrush.

The real story, as we have always known (deep within our stony black hearts) was obvious long before the jail story arrived to entertain the world:

“Handsome reader Marc knows one of the guards, and passed along this email from him:

"What's up. Sorry so long to get back. sends her regards. By all accounts she is a kook. Word is she has the mind of a 14 year old, addicted to coke, psych meds, claustrophobic, changes uniform every hour, etc..."

Keep in mind, this dude works at a county psyche ward, and still managed to distinguish herself. She's surrounded by pyromaniacs yelling at demons and schizophrenics who think they're Barabbas, and even there, the staff said to themselves, "Wow. This chick is a fuckin weirdo".

c/o – What would Tyler Durden do?

Okay, so we didn't know about the uniform changing thing before now, but we knew that she changed her clothes, like, so much more often than the rest of us.

The moral quandary is this: do we have to abandon jokes about Hilton because she isn't very bright, and because she is very likely more than just a little mentally unwell (the former quite possibly contributing to the latter)?