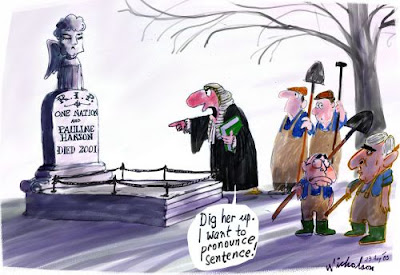 Pauline Hanson, again giving it a burl to be one of our Federal parliamentary representatives, is older, wiser, more mature, and her knowledge of politics is a lot broader. Which is terrific, seeing as her knowledge of religion and convicted terrorist aider and abettors is, at best, the banging’s of an empty vessel.

“There are Christian Muslims - there is no problems about that," she told ABC radio yesterday.”

In another curious statement, Ms Hanson said had been "taken over by Muslims, despite a long history of Islam in that country".

She also said she had no sympathy for confessed terrorist collaborator David Hicks, saying he was "prepared to blow himself up to kill other people".

We would never accuse Pauline of being perspicacious; no siree, not on this little blog.

We would accuse her –with the conviction of superglue – of being an ass, a monkey, harebrained, a dullard, a dolt, a clod, a fatuous nincompoop, a simpleton; and on her good days, a dunce and a fool brimming with poppycock.

This woman, so profligate with her ignorance, should be expunged from our political landscape, erased from out collective conscious, damned to the hell of listing to her own voice for all eternity.

Please, someone make her go away.