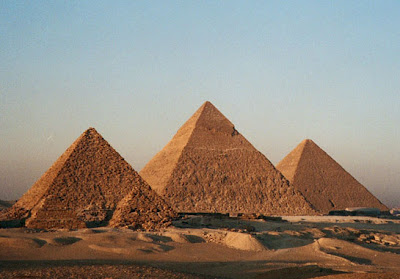 There is only one of the left, and even it is potentially facing the utter indignity of being voted off the one-wonder list as web users cast their vote for a new list of seven wonders.

The remaining ancient wonder of the world is 's Pyramids at .

The largest and oldest of the three, the Great Pyramid, was built for the pharaoh Khufu (called Cheops by the Greeks) in the 26th century BC. That makes it 2,000 years older than any other wonder on the list. The Great Pyramid climbs more than 450 feet (138 meters) into the sky. It was the tallest structure on Earth for almost 4,000 years, until European cathedrals started reaching for heaven. It's made up of about 2.3 million massive blocks of stone, weighing perhaps 6 million tons all told. Some have described it as the most colossal single building ever erected on the planet.

The six lost wonders of the world were:

Bible readers know Nebuchadnezzar II as the king who, in 587 BC, destroyed the of and forced the Jews into exile in . But ancient tourists knew him as the man behind 's . Built around 600 BC, the gardens grew on the roof of a terraced structure within his palace walls, irrigated by pumps that drew water up from the . Today, is a ruin near , and no definitive trace of the gardens has ever been found.

Temple of Artemis at Ephesus

The Ephesians erected their great temple for Apollo's twin sister Artemis around 550 BC. They built it a second time in 356 BC, after a terrorist bent on fame set it ablaze. Located in today's , across the Aegean Sea from , the temple drew many Greeks bearing gifts. They marveled at its size, about the size of a football field surrounded by marble, with the inside filled with art. Little remains of the temple today, just fragments at the site and in museums.

Statue of Zeus at

In 435 BC, the famed Greek sculptor Phidias was pounding the last plates of gold and ivory into place on a 40-foot (12-meter) statue of Zeus, seated on a cedarwood throne. No one knows what became of the thunder god's likeness, but the workshop Phidias used to make it was found.

South of Ephesus, at , ruled Mausolus, a Persian satrap who admired the Greek way of life. When Mausolus died in 353 BC, his sister-widow-queen, Artemisia, built him the most opulent Greek tomb around. It was 135 feet (40 meters) tall, adorned on every side with sculpture, and capped with a pyramidal roof. An earthquake brought the tomb down in medieval times, and Mausolus's memory now survives mainly in the word mausoleum.

On the Greek of in the an army had besieged the island's capital. resisted for a year, and the army left. So the Rhodians reforged the army's abandoned bronze and iron weapons and sold its siege equipment to make a colossus: a 110-foot (34-meter) statue of the sun god Helios. By 280 BC, it stood tall on a marble pedestal near the harbor, until an earthquake toppled it just 56 years later.

In 's harbor, on a small island named Pharos, stood the original lighthouse. It was made around the same time as 's statue, but dwarfed it. It stood 384 feet (117 meters) high, or more. Fires burned at the top at night, and bronze mirrors reflected sunlight during the day. It stood until the 14th century, when earthquakes ruined it, too.

Cast your vote for a new, and we presume temporary, , from the list of 21 nominees.

No hurry though, you have another 146 days before voting closes.