The boys from BB rebuild their reputations

Michael Bric, or “John”, as he was known during his longish stint on ’s current season of that globally educational cultural edifice, Big Brother, has gone all shy since being removed from the BB house following his involvement in a “turkey slapping incident.”

While he was in the house Bric’s MySpace profile remained online, but the lad – who, according to host Gretel, was a wonderful housemate, having provided the audience with oodles of entertainment and garnered much affection from the other housemates – has taken his profile off the Internet. I can’t imagine why, as it shows him in such a flattering light – a real charmer. 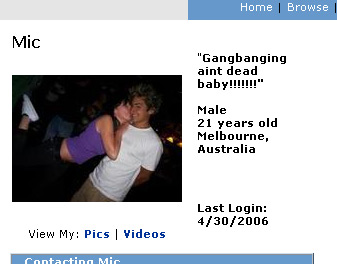 “He said film of the incident showed his son did not hold fellow housemate Camilla Halliwell, 22, down while Michael "Ashley" Cox rubbed his penis on her face.

He said it showed that, while his son's arm was across Halliwell, she was not restrained.”

Ah, well, that’s alright then; that changes everything.

Meanwhile, the other contestant tossed from the BB house for carrying out the “turkey slap” itself – Michael “Ashley” Cox – has apologized to women in general, assuring them that he’s not that kind of guy.

He should have left his apologies at that, but noooo, he then goes on to bemoan that he was really upset that he wasn’t allowed to say goodbye to his friends in the house (perhaps he thinks they will be staying there forever), and that he missed out on winning the big prize – ‘cause, you know, he was in with a good shot He is also really miffed because if only Channel 10 hadn’t kicked him out, no-one would have made a big deal about the whole turkey slap thing.

"Sexual assault to me is where someone has actually been assaulted and I didn't feel Camilla was assaulted at all.

"The whole thing was totally blown out of proportion."

The self-employed Warnbro bricklayer, who returns to work tomorrow, said he was distressed and angry about being forced out of the Big Brother house and missing out on saying goodbye to his friends.

"If they didn't make it an issue by kicking us out, it wouldn't be such a big deal," he said.

"I definitely do feel robbed. If I'd stayed in there I could have won and it would have made my life a lot easier.”

Small tip guys: your management advice was correct. But, hey, digging yourselves into a bigger hole? Yeah, that’s a perfectly reasonable alternative. Ooooh look, here’s an even bigger shovel ...