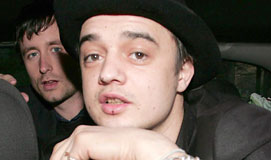 Britain’s The Sun newspaper has published photographs showing Peter Doherty injecting a substance into his own arm, however, being a gentleman, he firstly and allegedly injected drugs into the arm of a female fan, who is seen in the photograph lying unconscious on a kitchen floor. The picture was supposedly taken at Doherty’s home at some time during the last several weeks.

[No links that I could find.]

Perhaps now one of the generous judges in will stop releasing this low life revolting cretinous piece of scum on bail for a multitude of other drug charges and finally send the pasty-faced little piece of shit to jail.

There is a degree of squawking on some blogs that insist on defending Doherty as “a creative genius” and his drug use as irrelevant, citing lists of other musicians with "drug problems". I’m not buying it.

He’s just an ugly, unwashed, selfish, indulgent, junkie – none of which requires creativity or genius to pull off.