Mr Hockey, when asked how a jobless 27-year-old would pay the co-payment under his plan to strip under-30s of unemployment benefits, said: “Well, I would expect to be in a job. That’d be the starting point; you’d be in a job. And we need you to work.”

It was a philosophical tiff 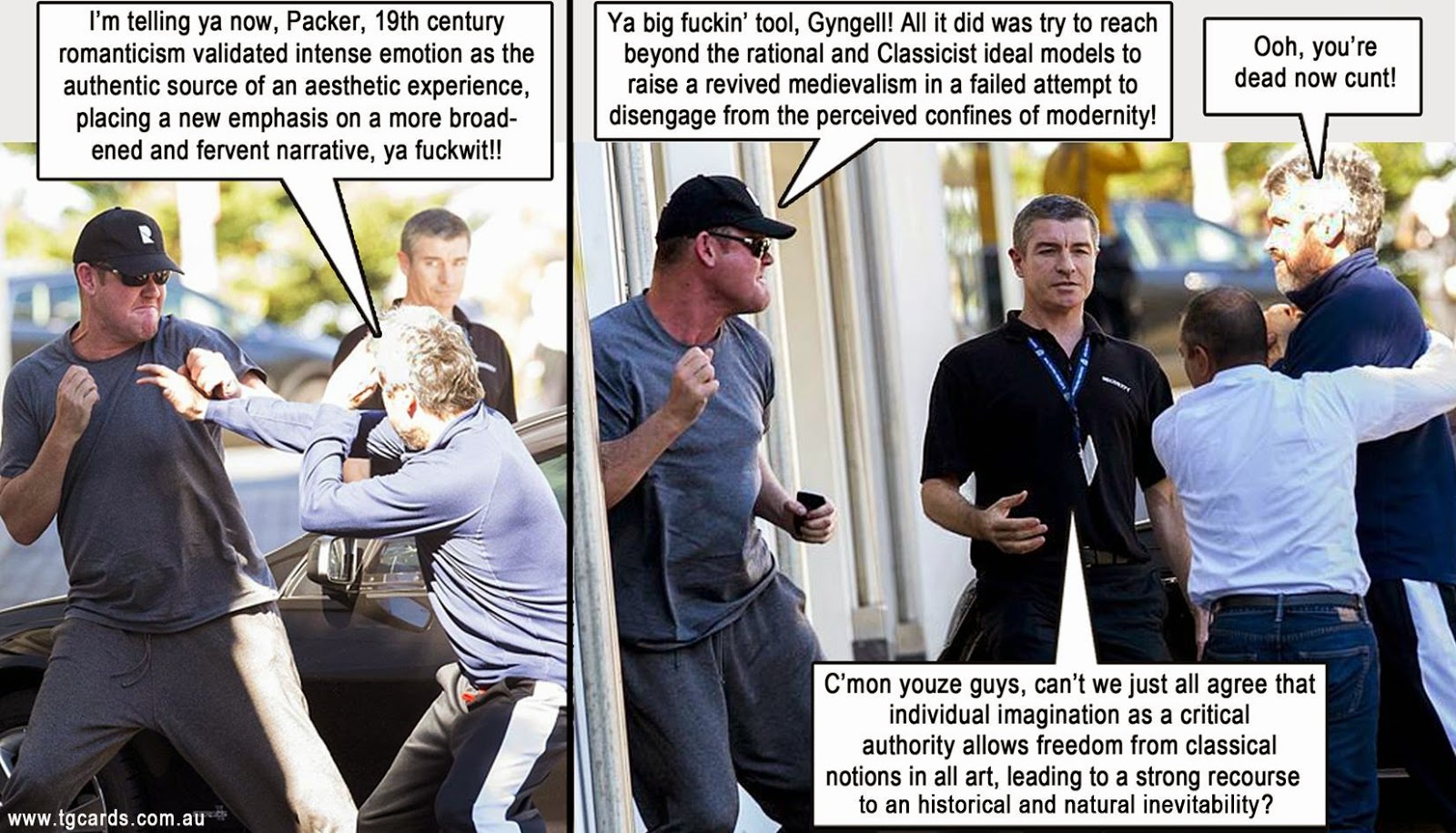 It's the quintessential Sydney story that is going global.

"If you were looking at it overseas you'd say, this fellow is a chief executive of a publicly listed company that has just refloated, and this guy is on the Forbes billionaire list.

"I don't think there's been a situation like this."

Gyngell and Packer later released a joint statement on the fight: "We have been friends for 35 years and still are. In that time we have had our fair share of ups and downs. We respect each other and neither of us will be commenting further."

Abbott and Hockey push the envelope of weasel words

How to raise $10B or more in four years:

Could it become known as the "Abbott moment", when a prime minister cursed his political fate and consigned his government to one term?

"Crazy", "electoral suicide", a "Gillard moment" were some of the comments from Coalition MPs, the latter remark a reference to Julia Gillard's commitment to a carbon tax, which haunted her to Labor's eventual defeat.

"Everyone is shell-shocked. They don't understand it," one Coalition MP said on Tuesday, after the Prime Minister confirmed a "temporary debt levy" for as long as four years was a live option for the Coalition.
"They are asking ‘why is he doing this?'."

The answer says much about the undeliverable platform the Coalition brought to the election and the true nature of the "budget emergency" the current government inherited from its predecessor.

But the "debt levy" raising $10 billion over four years is a different proposition entirely. It is not the work of the commission. It was cooked up in cabinet and commission chairman Tony Shepherd has let it be known he thinks it a foolish idea.

He also promised repeatedly not to increase taxes. "You can’t tax your way to prosperity" was a mantra. So was "Tax cuts, without new taxes".

Speaking to 3AW's Neil Mitchell on Tuesday, Abbott redefined that commitment. A tax is only a tax if it is introduced in perpetuity.

"If there was a permanent increase in taxation, that would certainly be inconsistent with the sort of things that were said before the election," he said.

Hockey intimated the government should be given a break because it was all Labor's fault for ruining the budget, a new riff on "non-core policies".

"Please, this idea, somehow, that everything we had ever said is going to be held against ... us because the previous government basically misled the Australian people about the state of the budget, is kind of ridiculous," he said.

In the campaign, the Coalition promised no new tax rises, while quarantining health and education spending from cuts, pensions from changes and increasing defence spending.

But the main reason for the decline in government's finances has been on the revenue side of the ledger. Revenue is down from 26 per cent to 23 per cent of gross domestic product in the past decade, while spending has remained at a relatively stable 25 per cent.

"If you are going to break a promise on taxation, you may as well do it properly."

Daley says removing the capital gains tax discount, abolishing negative gearing and cracking down on superannuation taxation benefits were some measures that would have raised the same revenue or more at the expense of the wealthy.

The superannuation system is an expensive mess and failing in its objective of stopping people relying on the aged pension, which 80 per cent of retirees still access.

Perversely, the superannuation tax concessions – worth as much as $35 billion a year – will cost the government more than it outlays on the aged pension in a few years.

There was plenty of criticism that the commission of audit's recommendations hit the poor while leaving the well-off largely insulated from change.

Its major reforms – on welfare, unemployment, health policies and foreign aid – all disproportionately affected those on below-average incomes, at home and abroad.

The commission – dominated by members of the Business Council of Australia and former Coalition staffers and politicians – also oddly called for a lower minimum wage, which has nothing to do with budget policy.
But concerns about the inequity in the commission's 86 recommendations highlights another fact that is often lost in the debate about the budget.

The commission's terms of reference were to look at government expenditure, not revenue or tax. Separate reviews on taxation and superannuation are coming and will be delivered before the next election.

Government sources also point out that the debt levy will only hit 14 per cent of taxpayers, so may not have the negative political impact some are predicting.

As Abbott learnt to his advantage as opposition leader, trust is hard to earn, easy to lose – and even harder to regain.

And 14 per cent of the 'wealthy' can't possibly turn an election result, can they.

And apparently the poor, the sick and the pensioners don't vote.

PMs err on wrong side of umm

I cannot believe Tony Abbott. Is it not possible for our Prime Minister to say something that’s not delivered in a slow, robotic and repetitive — I say again, repetitive — cadence? Or that isn’t prefaced with the stuttering ­utterances of “err” and “well”?

For goodness sake, man, you are a Rhodes Scholar. Act like one, or at least speak like one. Show us the ­lucidity of your thinking through the fluency and the eloquence of your language. Surely there’s a sharp mind in there, somewhere. Hello?

Not that his predecessor was any better. Tell me that Kevin Rudd did not utter to President Barack Obama in front of the world’s media the term “programmatic specificity”? Please tell me this is an urban myth.

Kevin, what were you thinking? You are at best the head of a colony from the farthest edges of the known world. Your place in Obama’s presence is to look smart, pose for pictures, be grateful for an audience and use language that is pre-eminently forgettable. I know this is a hard concept to get your head around, Kevin, but “blend in”.

Do not get me started on Julia Gillard. I understand that, like Rudd and Abbott, she too could well be a delightful conversationalist, but as prime minister her plodding through the paragraphs of a prepared statement was painful. Palpably painful. For everyone and anyone within earshot!

I’m not sure whether Julia improved her elocution throughout her term or whether it was that my ear plasticised to the Gillard auditory form, but towards the end I quite liked her twang. It was oddly reassuring. It was distinctively Australian. I did not care for the substance or indeed for the context of her now famous, or infamous, misogyny speech but as a piece of spontaneous oratory it was powerful, fluid, gladiatorial and magnificent. And that is why it is memorable.

John Howard’s oratory did not offend me. Regardless of what you might have thought of his politics, Howard found a way to deliver his message without the delivery getting in the way.

Paul Keating was an orator on a grand colonial scale. He delivered daily what Gillard managed once. His language was direct. His imagery was as colourful as it was grandiloquently biblical.

It strikes me that the oratory skills of the Australian PM genus have diminished within a single digital generation. And I suspect that this outcome derives in turn from the effects of the ruthless process of natural selection. Either the verbally skilled are being naturally ­diverted to other occupations — such as advocacy, perhaps — or they are having their language curated and mightily managed during the apprenticeship years. The net effect is a muted, perhaps even a neutered, newspeak political form.

No PM can now truly speak their mind. Every utterance is examined. Every verbal misstep is captured, dissected and displayed to the hawing masses as evidence of wider incompetence. Far better to play it safe and stick to the script even if it deprives our public discourse of the passion that would naturally flow from the frisson of people of verbal skill and conviction. And this is why Tony Abbott and his successors will forever be advised to always choose their words carefully. 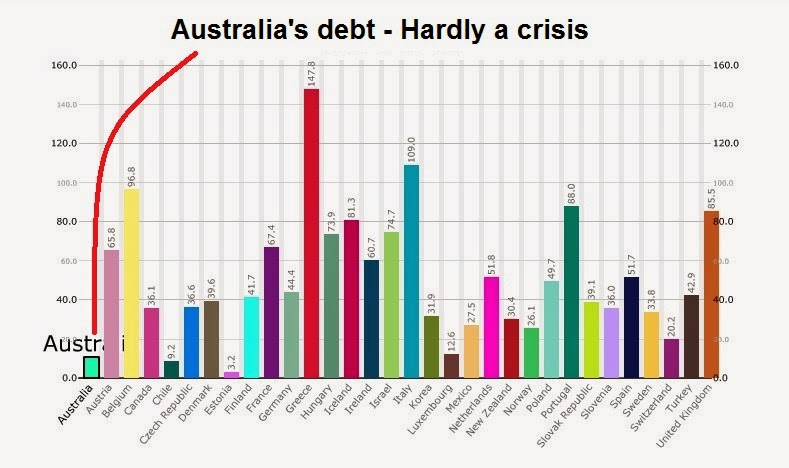 Everyone without money and without advantages, socially or economically, will be hit by the Abbott Government, to fund a deficit that is a mere drop in the ocean, and still hasn't reduced Australia's fortunate comparative economic position in the world.  A sound, safe economy.  Other treasurers would give their right arm.

If the Abbott Government wants to destroy the economy, including consumption, investment, and reducing tax revenues even further, then yes, they seem to have an excellent approach - in fact, they're nailed it:  triple A for economic and social destruction!

What's so attractive about a surplus, when all it illustrates is that the government has taken more money out of the economy than they needed?

Much like the ALP review of education funding, which omitted funding for private schools, the Liberal Party Commission of Audit omitted a myriad of things - including taxation - and the commissioners failed, in their recommendations, to take account of real life.

Try finding money to move when you've been unemployed for a year, and see how moving - as a young person - to where you don't know anyone, have no support ... oh, and yes, lets just hasten the death of rural areas and therefore rural economies, good-o.

Not to mention all those people, not yet even close to 70 years old, who already face age-discrimination in trying to keep or find employment.

Can the government distribute a list of all the 'unnecessary' GP visits people are making.  Do they mean for flu, or getting a sick leave certificate for their workplace, or a grizzly baby, heart disease, arthritis, cancer?

What's really sickening is how much personal enjoyment Joe Hockey is publicly displaying as he gloats about making the lives of the poor, the old, the sick impossible, and the lives of average and low income families dire.  Current and future generations will suffer because of Hockey's ruinous economic actions, his economic stupidity.

Abbott and Hockey - one term head kickers.  They've managed, in six months, to make Rudd and Gillard look almost grown up and responsible.

Their term in office has barely begun.  May the deities help us.