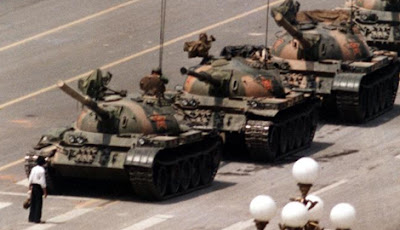 Read it and weep:  What's democracy done for me lately, asks Generation Y

Update:  below, c/o Jacob - the broader perspective is far more compelling than the famous photograph. 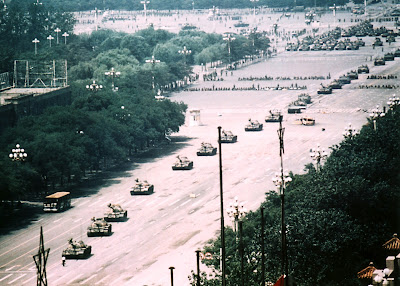 Just 39 per cent of Australians aged 18 to 29 say democracy is better than other forms of government.

Almost a quarter, 23 per cent, believe that "for someone like me, it doesn't matter what kind of government we have", while 37 per cent say non-democratic rule can be best.

Lowy Institute executive director Michael Wesley said yesterday he was surprised by "how lightly we take our democracy".

He said he thought it could be because Australia did not have to struggle for its freedom - or because of "the execrable behaviour of our parliamentarians".

Melbourne University music major Belinda Dalton, 22, said it was extreme to suggest democracy was the only form of government that worked, but she conceded it did have some positives.

"We don't live in a utopian society where everyone has the best intentions. People are still fairly power hungry," Ms Dalton said. "But I suppose democracy is the best way to ensure that people's interests are heard . . . it's not perfect, but nothing ever will be."

"China is a society and a state that functions without democracy, so is it bad?" Mr Trioli said. "You can't just judge it (because it's not democratic). It's whatever works for that culture."

Overall, Australians are less supportive of democracy than Indonesians, with only 60 per cent viewing it as preferable, compared with 62 per cent of Indonesians.

More Australians - 23 per cent - than Indonesians also say that "in some circumstances, a non-democratic government can be preferable". Only 16 per cent of Indonesians surveyed last year agreed.

The President of Melbourne University's first Indonesian student association, Briano Kawenang, 21, said some Australians undervalued democracy because they didn't understand how good they had it.

"This is the kind of thing you have to live in; you can't just understand by reading books or seeing it in the news," Mr Kawenang said.

I truly wouldn't have thought any person needs to live through all experiences to understand them, really understand them.  It doesn't take a huge amount of imagination or intelligence to appreciate that human life on this planet is not equal, nor equally dignified, for all, or even for the majority.
at 11:53 AM