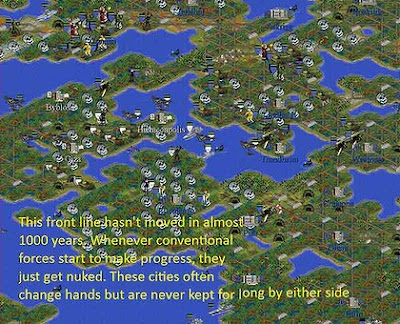 A "hellish nightmare of suffering and devastation".  No, not Australia 2012 under the hellish Gillard Government, and (here in Victoria) the sub-optimal Big Ted Government.  Rather, the world of 3991 is likely to be a less than fun place, and over a thousand years, it remains routinely, stubbornly unfun.  Much like today, with war a constant presence, but with only three regions fighting it out.  This is the prediction from a ten year video game, played by an exceptionally committed user named Lycerius.  The prediction doesn't change, no matter what he did to resolve things.


Lycerius said the ice caps had melted 20 times because of nuclear fallout. The only three remaining countries - the Celts, the Vikings and the Americans - were locked in an endless war over dwindling resources.

Lycerius said he tried destroying or allying with the two remaining countries, but it had not helped.

Apparently, most of the world's population has died due to lack of usable land, and the engineers and military forces cannot make any improvements because they are working on supporting the war efforts.