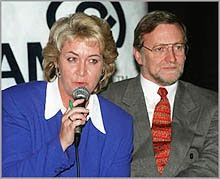 Alan Howe, at the Herald Sun, goes a step too far in reminding us of the good old days, when betrayal meant crossing the floor to fuck the minister.

Kernot was a whingeing under-achiever who got into the Democrats and then the Senate, sensationally jumped ship to join the Labor Party, and narrowly scored a Lower House seat, which she promptly lost at the next election.

Later, it turned out that the deceitful senator Gareth Evans had wooed the dippy Democrat to the ALP while exploring the pale acres of Kernot's flesh. [Ed - yeah, go on, rip out your eyeballs, you know you need to.]

Kernot had betrayed the electorate, her party, the Senate - even her husband and family. The untrustworthy Evans was also married with children and admitted he had lied to Parliament, but that was really a lie to the wife he had so shamefully humiliated.

Thanks for spelling that out to us Alan, but a little lighter on the visuals (eewwee) next time.