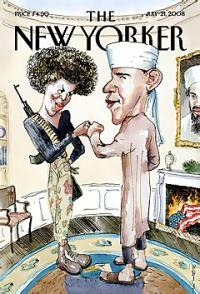 The New Yorker pushes the envelope of satire flying over the edge.
Attempting to satirize the scare tactics and misinformation tossed about by right-wing opponents of the Democrat's presumptive presidential nominee Barack Obama, The New Yorker has pushed everyone's tasteless and offensive buttons.

Apparently the article within offers a portrait of Obama as being relentless in his pursuit of donors and powerful friends. Wow. That's a scoop. New breed of politician. Who'd have thunk the sub-world of politics would sink to such naked depravity.
at 8:03 PM