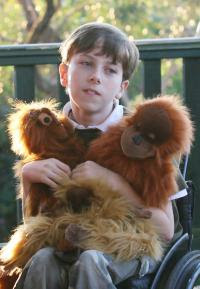 "Six months ago Daniel Clarke's desire to save the endangered orang-utans of Borneo and Sumatra and John Howard's desire for re-election melded perfectly.

Daniel, 11, who has cerebral palsy, appealed to the then prime minister for help when they met during a visit to the national rugby union team's rooms in May last year.

In November, Daniel became the focus of a YouTube video in which Mr Howard, appealing to young voters, pledged $500,000 over four years to the Australian Orang-utan Project (AOP). Then Mr Howard lost the election.

Environment Minister Peter Garrett has now introduced Daniel to the realities of politics. "Dear Daniel," wrote Mr Garrett in a letter received on May 14. "I write in relation to the former government's undertaking to the Australian Orang-utan Project to provide $200,000 in grant funding to support the work of the orang-utan units in Kalimantan, Indonesia.

"Unfortunately, there is no funding program available to support this activity."