Kev finds something resembling a hemroid 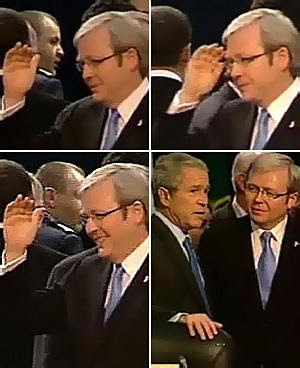 PM Kev took time out from his busy schedule to experiment with show a sense of humor.

For mysterious reasons, best known to himself and his invisible friends, Kev thought it would be a nice joke to salute George W Bush - in front of the world's press.

"Mr Rudd made the gesture and smiled when he spotted Mr Bush across a room at a Bucharest summit on military action in Afghanistan.

Asked about the greeting later by journalists, he said it was meant to be "a joke" and laughed out loud.

"I was just saying hi to the president of the United States - I was just with him the other day,'' Mr Rudd said.

Following the salute yesterday, Mr Rudd denied he was angling to take over Mr Howard's deputy sheriff nickname, saying it was in jest."