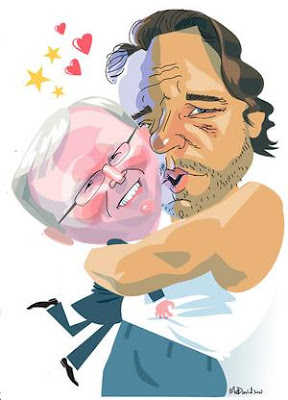 "The phone rang in Kevin Rudd's office one day last week. It was Russell Crowe. Well, not Rusty himself, but his people.

"Mr Crowe understands that Kevin will be in Washington over the weekend," said the Gladiator's personal attache. "And Mr Crowe would like Kevin to know that Russell will be available on Sunday if he wants to catch up."

Crowe's people confessed that the star actually had nothing he wanted to say to Kevin.

"Mr Crowe is aware that Kevin hasn't had a chance to meet him before," the attache said. "He thought Kevin might like the opportunity just to meet."

And Rudd's excruciating response? "Excited beyond words," one of Rudd's staff told me. "He blushed with happiness. Now we have to work out how to get the cameras into the meeting."

Read more, including how the Oz gov't is traditionally (and successfully) managed as a never-ending drinking binge ... G'day Kev, it's Russ ...
at 11:12 AM