Continuing a never ending series of environmental messages, sponsored by Duck Friday ™, because ducks are part of the environment and have avowed to offset their farts by 100% by doubling their flying time, thereby reducing their web print. Today they are cold, so they have donned beanies and sweaters to keep warm, rather than turning on their oil heaters. 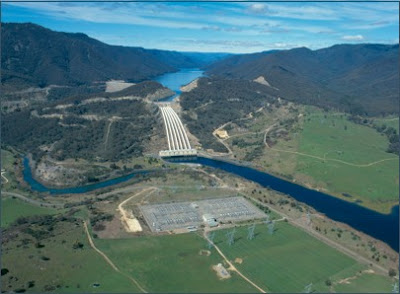 Renewable energy is the new black. The latest must have. The de rigueur accessory of the climatically changing season.

You can buy green energy over the phone by telling your energy provider that you no longer want your electricity supplies to be sourced from nasty brown coal.

Your alternatives are primarily hydro or wind power, and you can choose one or the other in total, or a proportion of both. If’ you’re undecided about this whole thing, you can hold onto some of your dirty brown coal power, thereby keeping one foot int the denier deluxe mountain hut and one foot in the catastrophizing tent.

Sure, it might cost you a few extra dollars a week, which is a bargain rip-off, cheap for being sold a pup, almost a steal for being hoodwinked. Some options won't cost you any extra at all, but you'll sleep well under the warm illusion of having reduced your carbon emissions.

Lest you believe that power companies would shy away from taking gross advantage of legislation by twisting the truth or telling porkies, please do your research properly before switching to “greener” energy options.

At the heart of this confusion is the distinction between "new" and "old" sources of renewable energy. "Old" sources are typically hydro-electric schemes, such as the scheme, which have been in existence for decades, so they don't make a difference to our greenhouse emissions balance sheet. They will continue to be part of our power generation system regardless of whether you direct your power company to source your electricity from them.

New schemes on the other hand are those that have been built since 1997. Buying new renewable energy creates a net reduction in greenhouse gas emissions.

Power from accredited operators, featuring the GreenPower logo, comes only from post-1997 renewable sources such as wind and solar.

However, many electricity generators market as "100 per cent renewable" products that have only the minimum accredited GreenPower component of 10 per cent, with the remainder from old renewable schemes. Typically these products are sold at no extra cost to the consumer.

"It's a bit of a con to make people think that they are doing something different," says sustainable energy consultant Jay Rutovitz. "It's the feel-good factor but it doesn't actually achieve anything - it's only the accredited GreenPower bit that is driving change. It's very confusing for consumers and it's very hard for them to understand."

Use this handy-dandy resource by Rutovitz Green Electricity Watch, which rates products according to their effectiveness in reducing damaging emissions.