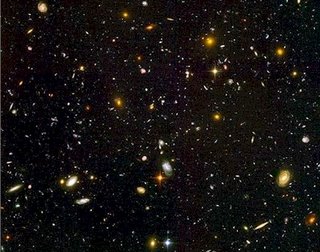 “Fleeting does not mean flaky or unstable, however. To the contrary: the fundamental quivers of the atom “are exceedingly regular,” Dr. Jaffe said, adding, “They mark the heartbeat of the universe.” Atomic events are so reliable, so like clockwork in their behavior, that we have started tuning our macroscopic timepieces to their standards, and our beloved second, once defined as a fraction of a solar day, is now officially linked to oscillations in a cesium atom.

Or look to the expanding firmaments, the unspeakably protracted pace of the space race. Cosmic time is as difficult to grasp as the twitchings of the atom, but it, too, is rule bound and reliable. Galaxies and clusters of galaxies are moving away from one another in defined intervals as the space between them expands like the rubber skin of an inflating balloon. They have been sailing outward from one another for nearly 14 billion years, since the staggering, soundless kaboom of the Big Bang set this and all clocks ticking, and they will continue their dispersal for tens of billions, hundreds of billions of years more.

We are poised between the extremities and homogeneities of nature, between delirium and ad infinitum, and our andante tempo may be the best, possibly the only pace open to us, or even to life generally. If we assume that whatever other intelligent beings that may be out there, in whatever alpha, beta or zepto barrio of the galaxy they may call home, arose through the gradual tragicomic tinkerings of natural selection, then they may well live lives proportioned much like ours, not too long and not too short. They’re dressed in a good pair of walking boots and taking it a day at a time. And if you listen closely you can hear them singing gibberish that sounds like Auld Lang Syne.”

By massive co-inky-dink, I was thinking this just the other day.