Smart as a fox 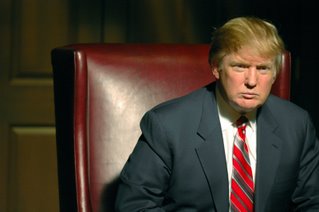 In a stunning end of week surge, The Donald has continued to prevail in the Rosie versus Trump war.

Taking guile to dizzying heights, Trump has written Rosie a kind letter in which he shares his own pain over being lied to by Barbara Walters.

I hope you had a wonderful vacation with your wife -- you needed the rest.

An article in today's New York Post, indicates that you blew up at Barbara Walters for being a 'liar.' Actually, I don't blame you, but in fact she lied to both of us! After your maniacal and foolish rant against me two weeks ago, Barbara called me from her vacation (I did not call her) in order to apologize for your behavior. She had heard that I was going to retaliate against you and tried to talk me out of it. She very much wanted me to go on the show as soon as she got back so that she could 'patch things up' (I said no). To be exact, she said that 'working with her is like living in hell' and, more pointedly, 'Donald never get into the mud with pigs' and, 'don't worry, she won't be here for long.' Barbara knows exactly what she told me over the phone and she has to live with it. Perhaps that's why her initial statement was so mild!

In another incident, when I saw her eating at Le Cirque about two months ago and asked how 'Rosie was doing,' 'she sarcastically rolled her eyes and said 'Donald, do you have to ruin my meal.'

In any event, you have a good reason to be angry. Please give my warmest regards to Kelly!

P.S. I was surprised that you let your spat with Barbara get into the newspapers, but, as I have always said and as you proved with Rosie, the magazine, you are very self destructive. You must work on this for your own good!