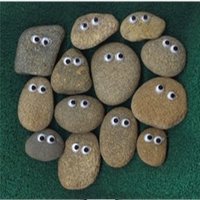 The opportunistic capitalist-mongers cashing in on climate change and all variety of environmental hysterics is growing as quickly as my carbon emissions.

Back in November Tim Blair had this post about buying wind power cards.
Now Blair brings us news of an even more preposterous green scam.

[Go on, off you go – read both of the posts you lazy buggers!]

The above actions, ostensibly offering you, the consumer, opportunities to “help” the environment are nothing more or less than the equivalent of buying a pet rock or a troll doll. 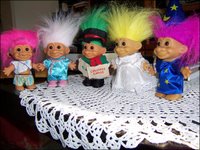 There are millions of entrepreneurs out there, all wanting to fleece you of your hard earned money. By all means allow yourself to be fleeced by spending your life’s savings on a giant energy guzzling flat screen teevee that will be technologically out of date long before the warranty expires, but for goodness sake do NOT, do NOT EVER hand over your money to provide profits to these delusional-feel-good and utterly useless businesses – you will not be helping the environment; you will be helping some total ass to your open wallet.

UPDATE: Truly, it does get worse:

"Saving the world can take up a lot of space.

Greenfleet, one of the nation's leading organisations helping individuals and companies offset carbon emissions, has for nearly three years been unable to find enough NSW land to plant the trees its subscribers have paid for.

As new subscriptions flood in, the not-for-profit group is searching for landholders willing to join the scheme and establish forests on their property.

At first, Greenfleet told the Herald it had a NSW backlog of about 88,000 trees that needed to go in the ground in the name of climate change prevention.

Some subscribers signed up as long ago as early 2004 but because of the land shortage and ferocity of the drought, tree planting has been severely curtailed.

But after learning of the Herald story Greenfleet said that in the late 1990s, before its incorporation in 2001, some 170,000 extra trees were planted. Greenfleet said this meant it was ahead in its commitments.

There have been few if any inspections to see how these 1990s plantings have fared, and Greenfleet still intends to plant new trees for new subscribers.

In October alone, Greenfleet committed itself to planting another 96,000 trees nationally. It was more subscriptions than Greenfleet has taken in the equivalent month for all of the past five years."