The Worm Has Turned 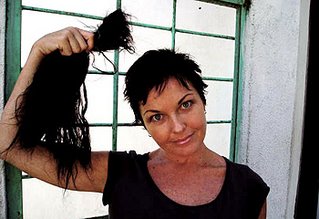 Cutting off her hair, back in May this year, failed to spark renewed interest in the Corby story from the Oz media, who universally ignored this dramatic development.

A few weeks ago I posted about the sneak preview contents of the Schapelle Corby book; as captured in a women’s mag, and then repeated across the MSM.

An anonymous reader posted some thoughts, which I intended to respond to, but kept running out of time & energy. So, to “anon”, if you’re out there somewhere, sorry for being tardy.

What I would have said to you, at that moment, is that I’m not convinced that journalists have turned against . I would also have pointed out that coverage of the book's content was, necessarily, out of context, as only an extract had been published, which is a common enough marketing ploy, ahead of a publishing release date.

Now the book is out on the shelves and we can be entirely confident that at least some media outlets have, well, let’s say, grown weary of the saga, and yes, rather less sympathetic than they once were.

Perhaps they don’t see how they can drag another 18 or 19 years of breathless interest and new insights into a story about a women locked in a jail, particularly one who has already beaten her legal options into some distant place far, far over the rainbow.

Witness "Exhibit A”, by Neil McMahon, in the Sydney Morning Herald. Not only does this tend to support “anons” contention, but McMahon’s piece will only take five minutes to read, thus saving you ever having to purchase or read the book, and his piece has the welcome bonus of sparing you having to even bother perusing the book reviews. McMahon has performed a social service of sorts.

Yes, the worm does seem to have turned on and her boogy board.

Her close relatives aren't much help in her ongoing PR dance. Perhaps that, as much as anything else, has dampened journalistic enthusiasm and unbridled support for this particular convict.