Wild fish are not organic 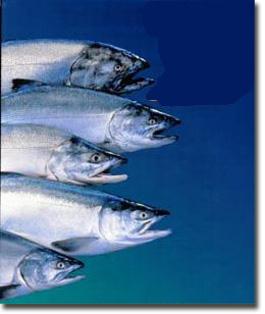 Your natural fish is the best, particularly for nutrients (only wild fish have high levels of your absolutely-beaut-for-everything-omega 3s), but over in the intricacies of what does or doesn’t constitute “organic” fish continues with an alarming trove of odoriferous manmade logic.

Way back in 2000, a task force ruled out the possibility that wild fish could be labeled organic.

“What it comes down to is organic is about agriculture, and catching wild animals isn’t agriculture.”

The task force recommended that farm-raised fish could be labeled organic as long as their diets were almost entirely organic plant feed."

The problem of “organic” fish has now been revisited, with expanded possibilities, but still not a wild fish in sight.

This rules out your omega rich wild salmon.

“Fish that are carnivores — salmon, for instance — are a different matter because they eat other fish, which cannot now be labeled organic.”

Relating to, derived from, or characteristic of living things;

Living organisms made up of carbon-based compounds;

Occurring or developing gradually and naturally, without being forced or contrived;

Forming a basic and inherent part of something and largely responsible for its identity or makeup;

Consisting of elements that exist together in a seemingly natural relationship that makes for organized efficiency;

Agriculture relating to or employing agricultural practices that avoid the use of synthetic chemicals in favor of naturally occurring pesticides, fertilizers, and other growing aids.

Meanwhile, the new blogger is trying to beat me into submission, with ever larger pages, reminders and cheerful notes appearing, encouraging me to make the move, irrevocably, every time I go to post anything.