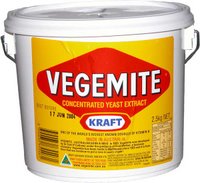 I hope there are a lot of forward-thinking Australians living in the USA, who thought to stock up on 2.5 kilo mega-tubs of Vegemite, rather than relying on little jars, on the optimistic assumption they could go and buy another one any old time. Not so.

Vegemite has been banned in the – not because everyone in the world, other than Australian’s think it’s a vile and disgusting condiment – no, the ban comes because Vegemite contains folate. Yes, it’s choke full of health giving vitamins, of the B complex variety, and in folate can only be added to bread and cereals, not to the spread that you put on your bread. Ipso facto, Vegemite is illegal in , and they are now cracking down on this serious offence, relentlessly stripping Aussies of their condiment and their vitamins.

What next, Tim Tams?

Meanwhile, is looking to ban hydrogen peroxide, among 86 other common everyday chemicals that have never been used for making a bomb in our fine land, at least not during the last couple of hundred years, but hey, it would be irresponsible to gamble away the next couple of hundred years, right? The federally proposed list of chemicals to be banned has been sent to state governments for comment.

If this is a true report, the days of the blonde in may be seriously endangered.

From the darkest ash blonde to the palest blonde, the various hues of natural blondness constitute about 2% of the world's population.

The fake blonde, on the other hand, can be seen enhancing the heads of around 70% of women. (At least, off the top of my head, that’s the last figure I can remember, but it may have even been higher. In other words, most women who colour their hair, colour it blonde, which is the sole reason why the world appears to be overwhelmingly full of blondes.)

As one hairdresser said: “It would be the end of hair as we know it.”

Or more accurately, the end of hair as we have pretended it to be.

Will the government inadvertently ruin the lives of fake blondes across the nation? Will they reallly be prepared to dig-in, perhaps scaring away thousands of tourists because of the extreme and unattractive regrowth problem that will cover our shores?

I’m thinking not, but we’ll have to wait and see whether vanity or irrational bans on commonly used chemicals will win the day. Maybe we'll see the emergence of illegal back alley trading in hydrogen peroxide, and only the seriously wealthy will be able to maintain their blondness. 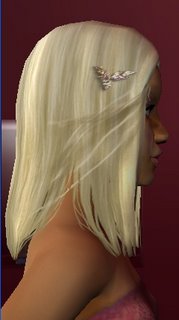 Wheat blonde, in Australia, might only be seen on wheat in future.