Under the auspices of the 5th anniversary tribute initiated by Dale Challener Roe, bloggers are today remembering those who died in the terrorist attacks on American soil on September 11, 2001.

A full list of 9/11 tributes, with links, can be found here. (Note: while this is the right link, there seem to be server problems, so it may or may not work.)

Bloggers have been asked to focus on the life of the person allocated to them, not on their death. Well, that’s easier said than done when my September 11 tribute is for Jeremy Logan Glick, much loved third child of Lloyd and Joan, sibling to five brothers and sisters, former martial arts champion, beloved husband of his high school sweet-heart Lyz, adoring father to their only child, Emerson, businessman in transit with access to a GTE Airfone, and a passenger on Flight 93. 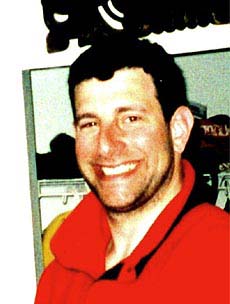 In Yiddish, Glick means luck, but of what kind isn’t defined.

By my rough reckoning, as many as half of the passengers and airline staff who boarded Flight 93 were there through last minute changes, many of them having wanted to get home sooner.

Jeremy’s circumstance was different, he wasn’t heading home, and if not for a fire a the previous day Jeremy would never have boarded Flight 93. If not for that delay, he would have been one of us, already at his business destination, perhaps watching television with some colleagues in collective awe and silence as the news of September 11 unfolded.

Even Flight 93 was delayed. Still sitting on the tarmac long after the due take off time, four terrorists on board, whose task that day would be out of kilter – out of time – with the work of the other terrorists, thus providing ample time for the WTC to be hit and for that fact to register as an attack on . Time enough for that message to be repeatedly conveyed to passengers on Flight 93, including Jeremy.

Lyz and Jeremy had met during 7th grade and were still together when they were crowned king and queen of their high school prom, before going separate ways to attend college. Sport was central to the Glick family, and through college Jeremy continued to show a singular determination to win and to do things his way. He used to say that he worked very hard to make national events so that he could get free trips to see Lyz.

On one such trip to , where Lyz was studying, Jeremy won the national judo title for his weight class. Perhaps not remarkable in itself – all of the Glick children had been taught judo as children, by the same coach, and, after all, someone had to win – but by then, Jeremy had no coach, his college had no team, or rather, he was the team for the . He was there all on his own. All except for a one man cheer squad – by chance his childhood coach, Ogasawara, was at the event too. So it was Jeremy, all alone, winning the national title, with Ogasawara cheering in his corner.

Together again after they had graduated from college, Jeremy and Lyz were married in 1996. Jeremy became a sales representative with Giga Information Group, until 2000, when he joined Vividence, a provider of Internet service products.

By all accounts, Jeremy wasn’t especially the best of anything. Not the best looking, not the most graceful or most talented athlete, and not the smartest student, but he was unforgettable, and every other kid wanted to be like him. Determined, courageous, physically and mentally strong. A natural leader with a fine character, decent and considerate. Jeremy’s parents had instilled in their children the values of compassion, courage and character. It would seem that Jeremy had added charisma, effortlessly.

When Jeremy called his wife at her parent’s home their relief at hearing from him was fleeting. The truth of his circumstance was clear all too quickly.

Jeremy and Lyz stayed on the phone for more than 20 minutes. Time enough to confirm that the plane was to be used as a missile, just as three others already had been that morning. Time enough for Jeremy to sob quietly as he realized that he wasn’t likely to survive. Time enough to speak of their love for each other.

Time enough for Jeremy to make a last joke about still having his butter knife from breakfast, the amusing suggestion left hanging that he could, at a pinch, use airline cutlery to overwhelm four terrorists, who had already murdered at least two people on the flight. A momentary offering of levity, a grim determination, a final gesture of connection with a wife and mother about to become a widow. No matter how hard they try, the living are not adept at suddenly acquiring such qualities at the moment before darkness.

At a little over six feet tall and at 220 pounds, three other passengers matched Jeremy’s physical size. The four of them were going to prevent the plane from reaching . Brute strength, a force of will. We imagine them running, fast and furious, toward the locked cockpit, a final act of redemption.

Since Jeremy’s death Lyz has written a book, an act of preservation for her baby girl, who was only 3 months old when her father died: “Your Father's Voice :Letters for Emmy About Life with Jeremy--and Without Him After 9/11” by Lyz Glick and Dan Zegart

In one of the first letters written to her daughter Lyz wrote: "The truth is, the ending wasn’t the best part or the worst part, it was just an ending.”

At the very end, the last words Jeremy spoke to Lyz were: “OK, we’re going to go do it. I’m going to put the phone down. I’ll be right back.”

At tower, controllers had been told to evacuate. Cleverland Air Traffic Control phoned again, only 45 seconds later, telling them to disregard, as the aircraft had turned to the south.

Two traffic controllers at studied the horizon to the south. They couldn't see a thing. It was 10:06 a.m.

Jeremy was 31 years old when he died. His life ended fearlessly and for others, exactly as he had lived.