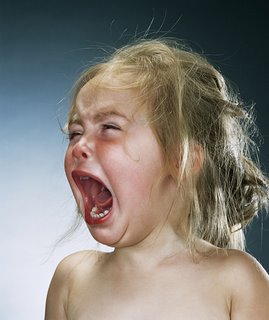 From Jill Greenberg's End Times. The rest can be found here.

All of which might explain why Jill Greenberg decided to express her personal political angst about US politics and the evangelical religious right by stealing lollies from toddlers, photographing their resulting distress, and giving the photographs highly charged political titles such as “Four more years” (of Bush in office – ed), or “Torture” (I expect we can guess – ed), or “Armageddon”, or “Apocalypse”, “Faith?”.

The over all title of Greenberg’s collection is End Times. Supposedly it has both “political and personal relevance”. Well, if you think stealing lollies from toddlers to make them cry is politically relevant, then yes, I suppose you’ll get the point of Greenberg’s work. You’ll also get why she photo-shopped the photographs into the ground, so as to exaggerate every tear, every fold of skin, and in doing so she also added a saturated sheen to each shot, resulting in an oddly sexualized perspective, not dissimilar to shimmering naked women in a blokes magazine.

Greenberg and her supporters seem to think that these photographs make a political statement, and are beautiful and poignant. According to Greenberg, the images are a way to "begin a national dialogue”. Huh? About what honey, abusing toddlers for your political beliefs? Politically speaking, Greenberg believes “their pain is a precursor of what is to come.” Funny about that, I thought their pain was because some tosser stole their lolly pops and manipulated the resulting photographs.