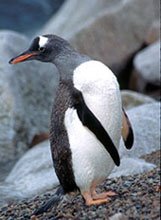 “'s iconic fairy penguins have been renamed "little penguins" in to avoid offending the gay community.”
Apparently no-one has ever complained about the “fairy” credentials of these penguins, least of all the gay community. No, ’s Sea World has taken this preemptive initiative to rename animals because:


“…someone thought it could be seen as offensive so we decided to change it to little penguin instead.”

Isn’t it great to know that big business acts upon any old dumb thought that passes through “someone’s” tiny little mind? A very slow working mind too, since fairy penguins have been around for, oooh, a really, really long time, and the gay community has been out & about for quite a while too.

“…'s gay community described it as ridiculous and unnecessary.

"If they were called poofter penguins or something more direct, it might be a problem. But I don't see the name fairy penguin as a mickey take.”

In , the home of the fairy penguin, nears it’s destiny as being the 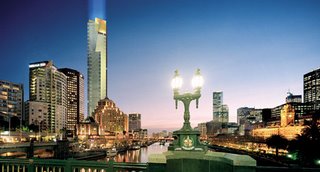 world’s tallest apartment building at over 300 metres. With construction almost complete, a proposal has been mooted to add a sweeping bridge structure to the top of the tower – imagine a half circle stretching 50 metres from one side of the building’s roof to the other side – the intention being to create a tourist destination and activity. (Sorry, no link to the article, or artist’s impression). In a vox pox by the Herald Sun (16 April, 2006), when asked “Do you think building a 50 m skywalk above is a good idea?” – one 42 year old woman allegedly responded with:

“It’s novel and anything that encourages physical activity is good.”

Up until now I hadn't considered that a leisurely 50 metre stroll, even at 350 metres above the ground, was exactly an aerobic workout. Nor had I considered that thousands of office workers might be trotting across a skywalk during their lunch hour in lieu of a visit to the gym. See just how limited is my imagination?