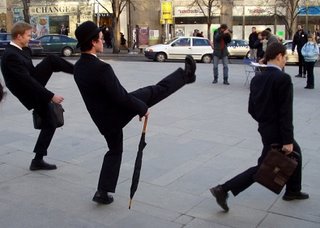 This is my token post about the Commonwealth Games, a large sporting event presently being hosted in our fair city.

I would have published some photographs of the awesome pyrotechnics and fabulous long shots of the entire city lit up like the proverbial Christmas tree, from the end phase of the otherwise cringe-worthy opening ceremony, but for reasons known only to them, the media didn’t publish any of what I expected to be shown of the city. They chose, instead, to publish the odd picture of flying trams, a nice young boy, and a duck whose semantic significance escaped all of us. So, you’ll have to take my word for it: the city looked spectacular.

My interest in the Games sporting commentary was piqued a little the other night when I tuned into the coverage and heard a female commentator seemingly obsessed with “warder”. Yes, really. It went something like this:

It eventually occurred to me that the former Australian champion swimmer – who was the second half of the commentary team – with her new birds eye view of the sport, was overwhelmed and astonished that yes, indeedy doo, the sport is conducted within the confines of a very large amount of water.

I’m hoping she will recover from her awe and wonder at this fact, some time before the next Games, or perhaps during her next elocution lesson.

I also caught a little glimpse of the marathon “walkers”, a race during which not a single commentator was compelled to tell me anything at all about the asphalt over which the participants were gliding, powering, leading from the front, etc. I recovered from that mild disappointment, only to ponder the continuing relevance of walking as a competitive sport. You see, the “walk”, with all its stylized strangeness, has become more and more unnatural over the years. Sure, perhaps not as unnatural as the girl coming out of the well and through the television set in The Ring (the real version), but all the same, it was always a tad ungainly.

The walk, to my mind, is no longer just another silly walk, worthy, apparently of a medal; rather, it has morphed into a silly jog. I don’t care how they slice it, or how they rationalize it, the competitors are not walking – they are jogging, albeit in a very silly manner. They are no longer walking quickly; they are jogging slowly. It’s time for the walking events to leave the stadium on the grounds of being a fraud.

The Games still have several days to go, and the haul of gold by is already mortifying, unseemly, ungracious, and greedy. I don’t begrudge any of our medal winners, really I don’t, but it would have been nice to share just a little more than we have. Sharing is nice.

Apart from the cache of gold, the Games will leave behind a cache of athletes not too keen on returning to their own country. So far we have seven athletes from Sierra Leonean reported “missing”. I’m expecting that count to increase before Sunday. We must be able to out do on those numbers – they had ten left over athletes following their Commonwealth Games. Come on, we can beat that!
at 1:40 PM